The Xiaomi Mi 6 looked very impressive with its specifications in all the rumours, which came out to be true, the phone indeed looks impressive. The smartphone bears a 5.15 inch Full HD (1920 x 1080) display. It is the same as that of Mi 5 but the company emphasises its improved brightness of 600 nits along with 4096 levels of backlight adjustments in the display. The smartphone as rumoured, is powered by the 10 nm 64-bit octa core Qualcomm Snapdragon 835 processor clocked at 2.45 GHz along with Adreno 540 GPU. All the three variants contain 6 GB RAM but as mentioned earlier, they differ in internal storage options of 64 GB and 128 GB.

Going towards the important camera department, the Mi 6 is equipped with a Dual camera set up at the back, similar to what was leaked. Both the sensors of the dual camera setup are of 12 MP where, one is a wide angle lens while another is a telephoto lens for 2x loss-less zoom. As per Xiaomi, “Its binocular stereoscopic vision imaging and depth learning algorithm makes edge recognition more accurate in the photos”. Some other features of the rear camera include 4k recording support, four-axis anti-shake to prevent Blur and Phase-Detection auto focus. The Mi 6 also holds an 8 MP front shooter for selfies and video calls. 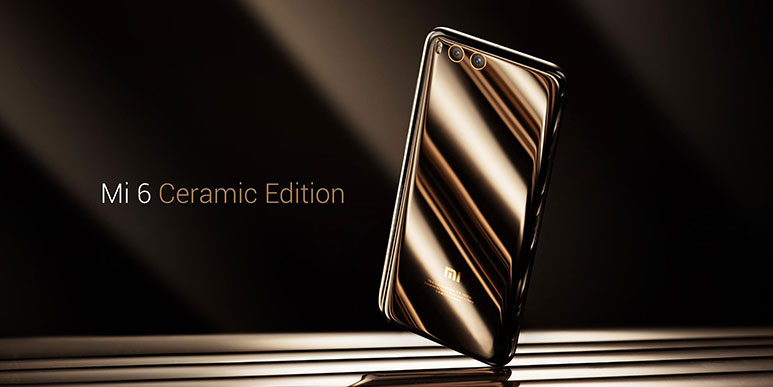 Xiaomi has kept a sleek design for the Mi 6. Although the phone does not have a bezel-less design but the company boasts of its four side curved 3D glass design. Also, it has a stainless steel frame with two layers of glass, followed by a special polishing which takes over 12 days and 40 different processes to be achieved. The smartphone is available in blue, white and black color options along with a ceramic edition.

The connectivity options of the Mi 6 include the highlighting 2×2 MIMO Wi-Fi and 4G+ connectivity for lightning fast download speeds, as per the company. Along with this, there is Bluetooth v5.0, GPS, GLONASS, Beidou, NFC and USB Type-C. The Mi 6 has got an ultrasonic fingerprint sensor on front beneath the glass which is seen first time in any smartphone. The Mi 6 does not come with the standard 3.5 mm heaphone jack.