Xiaomi is a all set to launch a new dual rear camera smartphone tomorrow in India. Although the teasers led to an assumption that the smartphone to be launched could be the Mi 5X, however another tweet from the company recently, indicated that it will be altogether a ‘new series’ smartphone holding dual rear camera setup. This announcement from Xiaomi now points out to a possibility that the new smartphone could very well be the alleged Xiaomi Mi A1 Android One smartphone, rumours of which have been popping up from a while.

The possibilities are endless and it begins with #FlagshipDualCamera! What could it potentially be? pic.twitter.com/KJklWHzut2

As per the reports, the Mi A1 is said to sport the same design and specifications as that of the recently launched Mi 5X from Xiaomi but will run on the Stock Android UI instead of company’s popular MIUI skin. It is even expected to sport the dual rear camera setup like the Mi 5X. Considering this, we can now expect that the ‘new series’ smartphone launching tomorrow could be the Mi A1.

Also, the E-commerce giant Flipkart recently announced the new smartphone will be sold exclusive via its platform only. Although even Flipkart doesn’t mentioned the name of the smartphone in its teaser, but the source for that particular banner reveals the name ‘Mi A1’, certainly spilling out the secret.

Apart from this, the Mi A1 was also spotted on Geekbench recently, revealing few of its specification details. As per the listing, the smartphone will come with 4 GB RAM and will be running on Android 7.1.2 Nougat. The smartphone scores 852 in single-core test and 3837 in multi-core test which interestingly resembles to the smartphones powered by Snapdragon 625 (the Mi 5X also holds the same), hence we can expect the Mi A1 to hold the same under the hood. 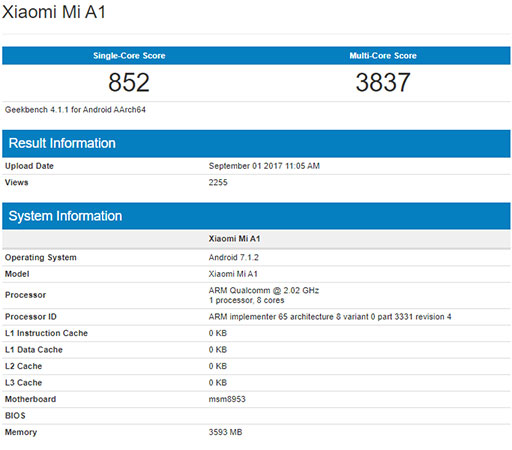 The Mi A1 is said to be the first in the Android One portfolio to sport a dual camera setup at the rear. The Android One smartphones comply with certain Google’s guideline in terms of quality, software and specifications. However, as known by everyone, Xiaomi itself maintains quite high standards even for its budget smartphones and already offers a lot so, Xiaomi coming with an Android One smartphone will certainly raise the bar higher for Google’s project.

Let’s wait for a few hours and we will have another compelling smartphone with dual cameras in low budget.