Xiaomi has officially announced that the launch of its upcoming phablet, Mi Max will be held on May 10. The company has also released a teaser image of the phablet, bragging that the large-display sized smartphone could fit into your pockets.

However, Xiaomi hasn’t disclosed anything else about the device, a GFXBench listing reveals that it could feature a huge 6.4-inch Full HD (1920 x 1080 pixels) IPS display. It will be powered by a Hexa-Core Snapdragon 650 processor with Adreno 510 GPU and will be available in two variants; 2 GB RAM with 16 GB storage and 3 GB RAM with 32 GB storage, similar to the Redmi Note 3. It may run on Android 6.0 Marshmallow with MIUI 7 on top. 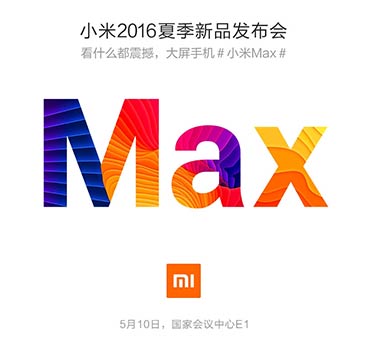 The Mi Max is also said to sport a 16 megapixel rear camera with dual-tone LED Flash and a 5 megapixel camera on front. It is rumored that it could pack a massive 5000mAh battery and will have a fingerprint sensor at the back.

We will get the confirm details of the phone on the launch event only, that will take place at Beijing National Convention Center, China.