Xiaomi is all set to launch its Redmi 4 smartphone tomorrow in China, but as usual the case, its retail box got leaked in images ahead of its launch, revealing most its specifications.

According to the leaked photo by TimesNews.co.uk, the Redmi 4 will feature a 5.5-inch display, a 2GHz MediaTek Helio X20 deca-core processor, 3GB RAM, a 13-megapixel camera, a 5-megapixel front camera, 64GB of inbuilt storage, and a 4100mAh battery. However, there could also be the second variant of the smartphone that will feature a Snapdragon 625 SoC, 2 GB RAM, and 32GB  internal storage, as spotted on Tenaa earlier. 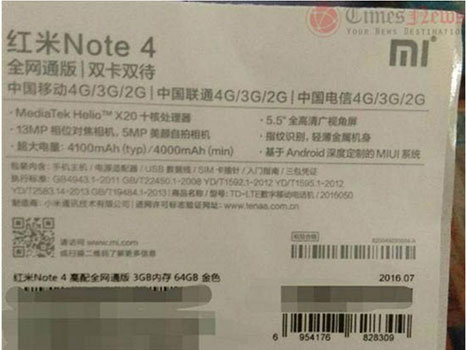 The Chinese company is also expected to launch the Mi Note 2 on September 2, which may pack a dual-edge display, 64GB/128GB storage options, dual camera setup. As of now, there is not much information on this device, we hope to get some more details in upcoming days.