After appearing in few leaked images earlier this month, Xiaomi Redmi 4 has got leaked again in live images along with its specifications by a Weibo user.

As of now, we already know that the upcoming Xiaomi Redmi 4 smartphone will sport a 5-inch Full-HD display, an octa-core Snapdragon 625 SoC, paired with 3GB RAM and will run on Android 6.0 Marshmallow, thanks to Geekbench listing. Although the new leaked image suggests that there will be another variant with 2GB of RAM and 16GB of internal storage, that will run on the Android 6.0.1 based MIUI 8. In terms of design, the new leaked images corroborate the previous leaks. 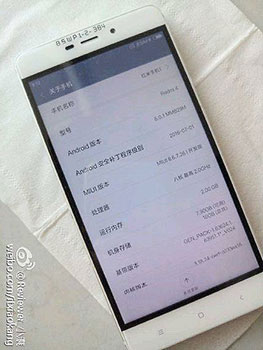 Xiaomi is expected to launch the full metal unibody designed Redmi 4 smartphone on August 25th in China, followed by the launch of Mi Note 2 on September 5th.