Xiaomi has officially launched its much-anticipated smartphone, Redmi Note 3 at an event in New Delhi, India. The full metal unibody designed phablet will be the Xiaomi’s first product to feature a fingerprint sensor in India. It will be offered in Silver, Gold and Dark Grey color variants.

The Redmi Note 3 flaunts a 5.5 inch Full HD (1920 X 1080 pixel) IPS LCD display with pixel density of 403 ppi. Under the hood, it has world premier Qualcomm’s Snapdragon 650 (Quad-core 1.4 GHz at Cortex-A53 & Dual-core 1.8 GHz at Cortex-A72) processor, coupled with Adreno 510 GPU. The company’s VP has claimed that CPU of Redmi Note 3 can outrun the performance of Snapdragon 810 SoC (the one which was used in OnePlus 2 and Nexus 6P). It comes in two variants, 2 GB LPDDR3 RAM with 16 GB storage space and 3 GB RAM variant with 32 GB storage space. On the software front, it runs on Android 5.0.2 Lollipop with company’s latest MIUI 7 on top.

The Note 3 sports a 16 megapixel, f/2.0, phase detection autofocus (PDAF), 5P lens, dual-LED (dual tone) flash and 5 megapixel of selfie camera with f/2.0 aperture. The phablet gets its juice from a beefy 4,050mAh battery, which company claims  that it has 47 % higher battery capacity than iPhone 6s Plus. It also supports quick charging, that takes only one hour to charge upto 50% and 3 hours for full charging. The fingerprint sensor can have up to 5 fingerprint profiles and then it can also unlock the phone with your lips. Yes. you heard that right, just kiss the Redmi Note 3 to unlock it. It also packs an infrared blaster and measures 150 x 76 x 8.7 mm and weighs 164 g. 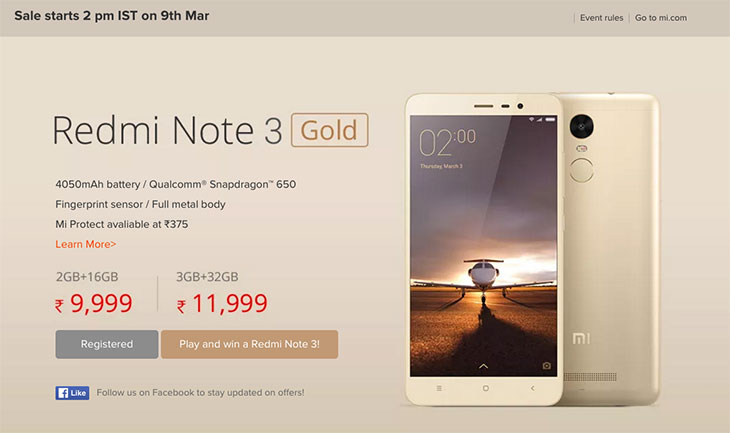 The Xiaomi Redmi Note 3 with 2 GB RAM and 16 GB storage is priced for Rs. 9,999, whereas the 3 GB RAM variant with 32 GB internal storage  is priced at Rs. 11,999. It also available with Mi protect at Rs. 375. The smartphone will go on flash sale on 9th March 2 PM IST exclusive on Amazon.in and Mi.com. However, company has said that, it will be available across all online retail platforms along with offline retail partners in coming months.

In the event, Hugo also said that Xiaomi will bring the recently launched flagship Xiaomi Mi 5 in India in one month.