After surfacing in the teaser image last week, Xiaomi Redmi Note 4 has surfaced again in a retail box image, revealing its specifications.

According to the leaked image shared on Weibo, Redmi Note 4 would sport Deca-Core MediaTek Helio X20 processor, instead of Snapdragon 652 SoC that was rumored earlier. However, the smartphone might get launched in two variants, as the recently leaked image shows the fingerprint sensor on the rear panel below the dual rear cameras, while there was no fingerprint scanner visible on the rear panel in the teaser image. 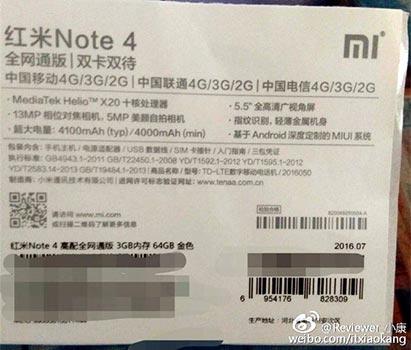 As for the other hardware specification, the Note 4 is expected to have 5.5-inch FHD display, 3GB RAM, 32GB/64GB storage, MIUI 8 based on Android 6.0 Marshmallow, 13MP dual rear camera, 5MP front camera, and 4000mAh battery.

Xiaomi is expected to be unveiled the Redmi Note 4 on 27th July in China.