Talking about the features of the smartphones, both the smartphones will have a 5.99-inch display, with 18:9 aspect ratio narrow bezel design. The smartphones have a premium metal body with a tapered back. This feature was last seen in Xiaomi’s Mi Mix 2, which is considered as the company’s flagship smartphone. Both the phones are available in two memory variants, about which we’ll talk in the later part of this article.

Among other similar qualities, the smartphones will be the first in Xiaomi’s Redmi Note series to feature Sony image sensors. All the variants of the newly launched smartphones will be available in Black, Gold, Rose Gold, and Blue colours. Both the phones will be sold exclusively on Flipkart, Mi.com and Mi Home Stores starting from 12 Noon on February 22nd, 2018 and will soon be available from offline retail stores as well. 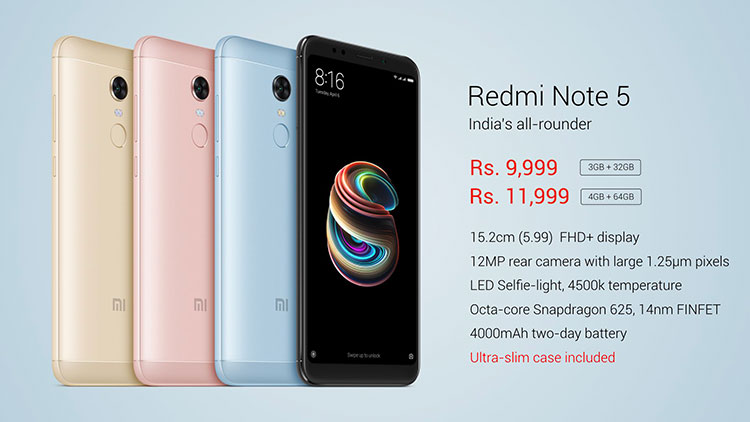 Looking at the smartphones separately, the Redmi Note 5 features a 5.99 -inch Full HD+ (1080 x 2160 pixels) display with Corning Gorilla Glass protection and 18:9 aspect ratio. The phone is powered by a 1.8 GHz Octa Core Snapdragon 625 SoC backed by Adreno 509 GPU. The smartphone features a single camera at the back with a 12 MP sensor and LED Flash. The fingerprint sensor on the phone has been mounted on the rear, right below the camera. On the front side, the smartphone has been provided with a 5 MP camera which is supported by LED selfie light with 4500K color temperature.

Apart from that, the front camera also features Beautify 4.0 that assists your pretty well, in your selfie-taking endeavors. Depending on the memory configuration, the Redmi Note 5 will be available at a price of Rs. 9,999 for the 3 GB RAM/ 32 GB  storage variant and a second variant with 4 GB RAM/ 64 GB storage is priced at Rs. 11,999 in India. On the software front, the device will be preloaded with Android 7.0 Nougat, running on the latest in-house MIUI 9. It should get the Android Oreo update soon. As for the power consumption, the phone will be dependent upon a 4000 mAh battery, which according to the claims of the company, will last the user an entire day. 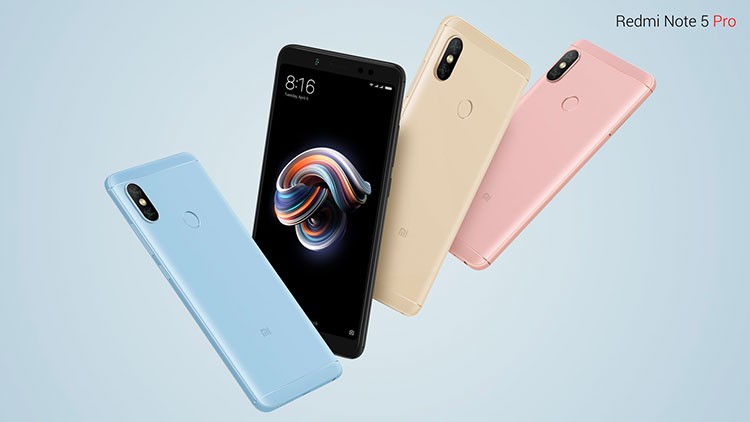 Talking about the premium version of the Redmi Note 5, the Redmi Note 5 Pro is the first of its kind ‘Pro’ variant seen in Xiaomi’s Redmi Note series. Apart from that, the company confirmed that it will be their first device to have a face unlock feature (will be rolled out in March via OTA update). The Redmi Note 5 Pro also features the same 5.99 -inch Full HD+ (1080 x 2160 pixels) display with Corning Gorilla Glass protection and 18:9 aspect ratio.

For computing, Xiaomi has gone big by using the new Snapdragon 636 which comes with Kyro cores like the Snapdragon 8xx series chipsets, while using the 14nm FinFET technology. The Redmi Note 5 Pro gets the 1.8 GHz Octa-Core Kyro Cortex Snapdragon 636 processor, which will be backed by Adreno 509 GPU for graphics requirements. It will be available in two memory configurations of 4 GB RAM/ 32 GB storage and 6 GB RAM/64 GB storage, which are priced at Rs. 13,999 and Rs. 16,999 respectively.

The highlight of the Redmi Note 5 Pro is the camera set-up. On the back, which also houses the fingerprint scanner, there sits a dual camera setup having 12 MP Sony IMX 486 sensor and a 5 MP secondary Samsung sensor, it also gets Dual LED flash. While for selfie lovers, the Redmi Note 5 Pro comes with a 20 MP Sony IMX 376 sensor, again accompanied with LED flash. Xiaomi in the launch event, boasted high about both the front and rear cameras of the Redmi Note 5 Pro, stating it to be their best camera smartphone launched in India yet and compared the selfie quality with the likes of iPhone X and Google Pixel 2 XL.

Sadly, the Redmi Note 5 Pro also comes preloaded with Android 7.0 Nougat with MIUI 9 running on top. It may soon get the Android Oreo update.