Xiaomi’s budget smartphones are immensely popular in India and get sold out in minutes. One such smartphone that has been a preferred choice for many buyers is the Redmi Note 4. After the popularity of Xiaomi Redmi Note 4, now the company is all set to bring in the next iteration that is the Xiaomi Redmi Note 5. The specification details of the smartphone have surfaced online revealing some key aspects and also giving a glimpse at what Xiaomi has in store for us.

According to the report on GSMarena, the recent leak which appears to be the presentation images of the Redmi Note 5 lists all the important specifications. The smartphone is tipped to sport the same 5.5-inch Full-HD (1080 x 1920 pixel) display but with a few advancements as compared to Redmi Note 4. Another report suggests that the device will be powered by the Snapdragon 630 SoC which has recently been launched by Qualcomm. However, here it is indicated that it can either be Snapdragon 630 or Snapdragon 660, which could very well be variant dependent. 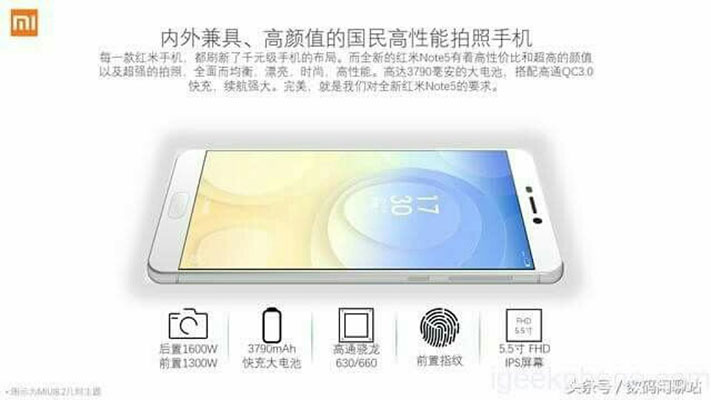 In the imaging department, the smartphone is speculated to hold a 16-megapixel rear camera with f/2.0 aperture and an LED flash. On the front side, the smartphone will pack a 13 MP camera for selfies. This is a serious upgrade if we compare it with Redmi Note 4 which comes with 13 MP rear camera and a 5 MP front camera. Interestingly, the fingerprint scanner will be placed under the display this time, unlike Redmi Note 4 or any other Xiaomi smartphone for that matter. 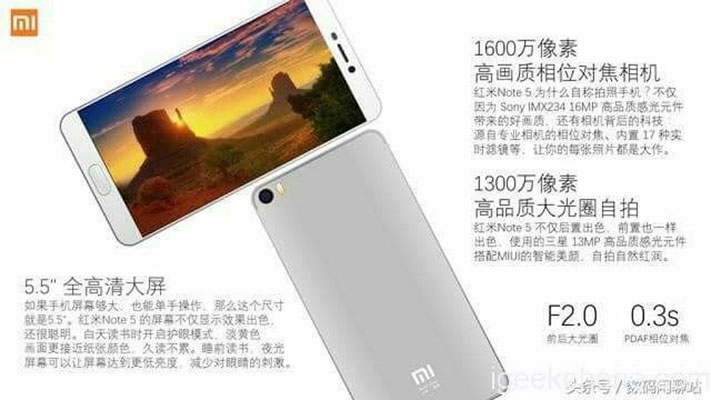 The Redmi Note 5 is expected to pack in a 3,790 mAh battery which is lower than the 4,100 mAh battery of its predecessor. However, the smartphone will most probably come with Quick charge 3.0 and the efficient power management by Snapdragon 630/660 will make up for the reduction in battery capacity. The smartphone is also said to come with the improved connectivity options including the X12 LTE modem, Bluetooth v5.0, and USB Type-C 3.1.

We can’t just control our excitement to see the phone if all of the above comes true!