India’s first home-grown messaging app Hike messenger has rolled out set of new features such as Stories, built-in camera and live filters on Thursday at an event in New Delhi. The move is intended to take on the likes of Snapchat and Instagram.

The first major feature launched by the company is called ‘Stories’. It allows users to share their moments with each other through photos and videos. The Timeline feature that was rolled out last year has been removed in favour of Stories. Like, Snapchat and Instagram the Stories are temporary and are automatically deleted after they are posted but, the time period in hike is 48 hours. 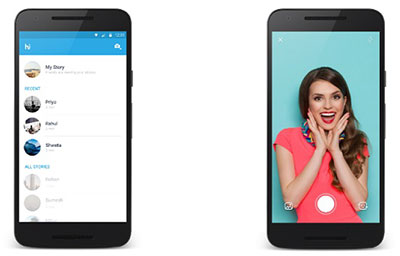 Hike’s second big feature addition is its new in-app camera that also packs in some augmented reality features. The camera has features like Live Filters and stickers and one can doodle on the pictures that are to be posted in the Stories section.

The new Live Filters feature uses machine learning and allows people to customize their faces in photos. There are a total of 12 Live Filters available presently, ranging from Black and White sunglasses to a Turban and Moustache and many more. There is even a filter that can change the user’s face to resemble that of Prime Minister Narendra Modi.

Stories is a new way for people on Hike to share their lives and real moments with their friends through photos and videos. One of our goals for 2016 has been to bring photos at the centre of Hike and Stories and Live Filters, we are doing just that. I really believe camera is the new keyboard.

All the features have started rolling out for Android and iOS users. Last month, hike video calling was also rolled out to everyone.