Lenovo has been putting out video teasers from a few days hinting the arrival of its next smartphone by tag ‘Killer Note’. While it was highly speculated to be the Lenovo K7 Note considering its taglines and captions, the recent video teasers hinted that the smartphone will be called as K8 Note instead. Finally revealing the name, Lenovo has now confirmed that the new smartphone in the K series will be called as Lenovo K8 Note and will be launching on 9th August.

The company has shared another teaser on twitter mentioning the launch date which reads, “The #LenovoK8Note will #KillTheOrdinary & leave the rest behind! Ready to see it uncage on 09.08.17  Save it!”. Previous to this, the company shared a teaser which featured a mathematical equation where it was asked to solve the equation and the answer will be name of the smartphone. Interestingly after solving, the answer came out to be 8 indicating that the smartphone will be named K8 Note. As it is said to be successor of the Lenovo K6 Note which was launched last year in December, technically it should have been named K7 Note but the company seems to have skipped the 7 figure.

Don’t get stuck between the 1s & 0s. Your answer might reveal what the next #KillerNote will be called! pic.twitter.com/q0CHsfU9DZ

Talking about the leaked specifications, the smartphone was spotted on Geekbench. As per the listing the smartphone will be powered by a 1.39 GHz deca-core MediaTek Helio X20 chipset coupled with 4 GB of RAM. This could very well be true as the company has been emphasizing the high performance of the smartphone in the teasers. The smartphone looks to be running on Android 7.1.1 Nougat out-of-the-box. The smartphone scored 1,659 and 4,844 for single and multi cores in benchmark test respectively. 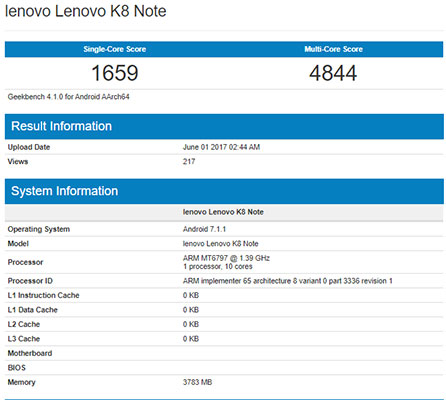 Sadly, nothing much expect this is known about the upcoming K8 Note. To recall, the Lenovo K6 Note which was launched last year in December was powered by the Snapdragon 435 SoC. Hence we’ll have to wait till 9th August to see if Lenovo has really switched from Snapdragon to a MediaTek processor, and if so will this switch be beneficial.