After several video teasers and promotions, Lenovo has finally launched its much awaited K8 Note smartphone in India. As it was teased earlier, the smartphone indeed seems to be ‘Killer’ considering its specifications and features at this price point. The K8 Note comes in as the successor of the K6 Note but the company decided to skip the ‘K7 Note’ this time. As per Lenovo, the K7 Note was apparently into the making but was only a single step upgrade over its predecessor while the company wanted to launch a real ‘Killer’ smartphone so, it went with all together a new device and next gen name.

The Lonovo K8 Note comes in two different variants, one with 3 GB RAM priced at Rs. 12,999 and another with 4 GB RAM priced at 13,999. The smartphone will be exclusively available via Amazon.in from August 18th in Gold and Venom Black colour variants. It also comes bundled with a few launch offers under which, all those who purchase the smartphone will get Rs. 900 discount on the Moto Sports Headphones, up to 80 percent off on Kindle ebooks (up to Rs. 300), and an Idea data offer of up to 64 GB of 4G data from Idea with unlimited calls for 56 days at Rs. 343.

As mentioned earlier, the smartphone is packed with number of features and apart from being the first dual rear camera smartphone from Lenovo in the K series, offers a lot at this price point. The K8 Note comes with a 5.5-inch Full-HD (1920 x 1080 pixels) display with 2.5D Curved glass and Corning Gorilla Glass protection on top. It is powered by a 2.3 GHz Deca core MediaTek Helio X23 processor, and will be the first phone to come with the powerful processor. The smartphone comes with 3 GB/ 4 GB RAM and 32 GB/ 64 GB internal storage options, and is expandable up to 128 GB via microSD card and comes with a dedicated slot for it.

Another highlight about the K8 Note is the inclusion of complete Stock Android UI instead of company’s own Pure UI. The smartphone runs on Android 7.1.1 Nougat with Stock Android UI on top which will enable better performance and faster updates. 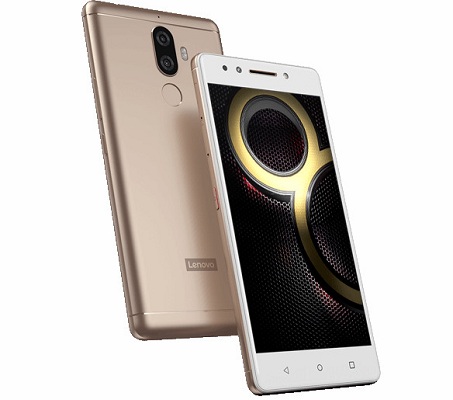 Coming towards its premium highlight i.e the imaging department, the smartphone holds a dual rear camera setup with a 13 MP primary sensor and a 5 MP secondary sensor. The rear camera is also accompanied with a dual-tone LED light and a PureCel Plus sensor to ensure a better image quality. The rear camera is also capable of capturing depth of field to provide bokeh effect. There is a 13 MP front camera as well with f/2.0 aperture, wide-angle lens and LED flash for better selfies in low light. Both the front and rear cameras support a complete PRO mode.

The Lenovo K8 Note holds a metal unibody made of 5000-series aluminium and it is also said to come with water resistant nano coating which makes it splash proof. The smartphone embeds a fingerprint sensor on the rear and also comes with a dedicated music button which launches the music app with one click. Apart from this, the music button is completely customisable and can also be used to launch different apps and can also control music play list by switching to the next or previous songs. The company is also highlighting smartphone’s Dolby Atmos support for improved audio performance, making it up to the mark in every department. It also comes with Lenovo’s TheatreMax support. It houses a massive 4,000 mAh battery which is rated to deliver 24.7 hours of talk time, and 378 hours of standby time. The smartphone supports Turbo Charging and comes with 15W fast charger as well.