LG, the South Korean giant has unveiled its new V10 smartphone at an event in its home county yesterday. This is a unique smartphone which comes with an additional display apart from its regular screen. V10 is the first smartphone from LG containing steel on its sides along with sporting a silicon-based tough rear cover to provide more strength to the device.

The LG V10 smartphone features a regular 5.7 inch Quad HD (2560×1440 pixels) IPS Display with 513ppi and an additional small display just above the 5.7 inches screen and adjacent to the front camera setup. The secondary display shows date, time, weather and recent applications. It also shows notifications when the main display is off and it also shows the music controls or volume controller when you are playing a song or watching a video. 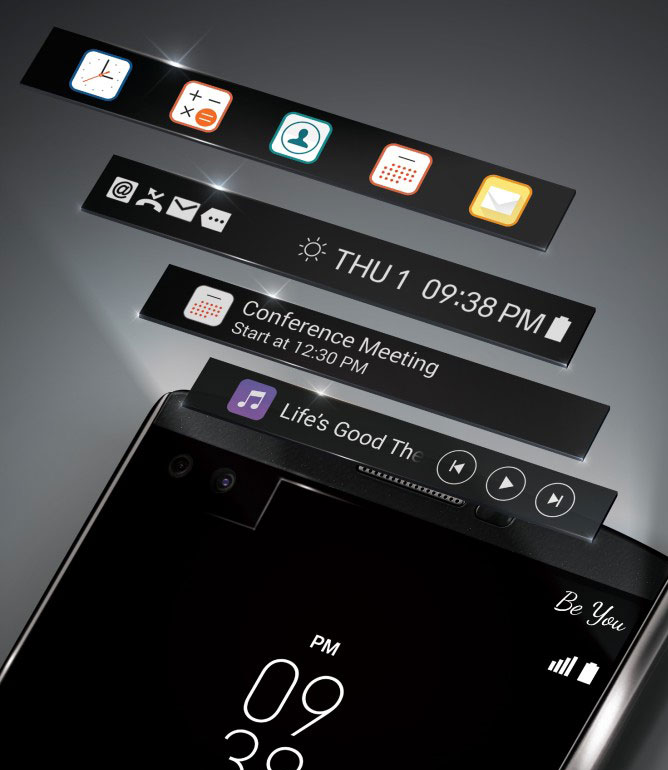 The device also boasts of a duo of front-facing cameras aiding to capture a wider scene during a selfie shot with more precision in the captured image. The two front facing cameras are of 5 megapixels and come with a standard 80 degree angle and a 120 degree wide-angle lens. While the 16MP rear camera comes with f/1.8 Aperture and OIS 2.0, it comes with the necessary tweaks through which you can increase the image quality.

The device is powered by a Snapdragon 808 processor supported with 4GB LPDDR3 RAM. It is backed by a removable battery of 3000 mAh. The company says that the second screen will not consume much battery. The phone also packs two Gorilla Glass 4 panels on the display.

The device has passed military level durability tests, making it stand against the drops made from 48 inches, aiding you to use it without the fear of accidental falls.

The phone will be available from 8th October in Korea and will be soon rolled in the United States through LG’s mobile partners AT&T, Verizon and T-Mobile. The Phone will be priced at 800,000 won (Approx. $678) which makes it costlier than company’s last premium release G4.