The Lenovo-owned Motorola launched its Moto E4 Plus budget smartphone in India a couple of days ago and no sooner than the smartphone went on sale, it has already gained popularity. As per a new report, over 1 million units of the Moto E4 Plus smartphone got sold within 24 hours since it went for sale via Flipkart on 12th July.

Flipkart in a statement said, “Following the midnight launch on 12th July, Flipkart sold Moto E4 Plus at a rate of over 580 units per minute (for the first 60 minutes),” the e-commerce site also mentioned that demand for Moto E4 Plus was particularly strong in northern Indian cities. “The contribution of the states of UP and Bihar combined is 12 per cent to the overall sales number achieved,” it further stated.

To recall, the smartphone was launched on 12 July in India and comes under the ever popular budget segment. The smartphone gives a direct competition to the Budget smartphones from Xiaomi, especially the recently launched Redmi 4. Although the Redmi 4 is far ahead in popularity and sales in India, but from the initial signs of Moto E4 Plus it appears that both the smartphones could go neck to neck in near future.

Talking about the specifications, the Moto E4 Plus bears a 5.5-inch HD (720 x 1280 pixels) IPS LCD display and is powered by a 1.3 GHz quad core MediaTek MT6737 processor along with Mali T720 MP1 GPU. The smartphone comes with 3 GB RAM and 32 GB internal storage which can be further expanded up to 128 GB via microSD card. The Moto E4 Plus is running on Android 7.1.1 Nougat.

The optics of Moto E4 Plus include a 13 MP rear camera with auto-focus, f/2.0 aperture and LED flash, alongside a 5 MP front-facing camera with f/2.2 aperture, and LED flash as well. The smartphone houses a massive 5,000 mAh battery with 10w rapid charging support which is the biggest highlight. The smartphone comes with a fingerprint scanner embedded in the home button. The phone also has water-repellent nano coating along with support for Dolby Atmos. The connectivity options include 4G LTE, Bluetooth v4.2, NFC (optional), Wi-Fi 802.11n and GPS. The smartphone measures 155 x 77.5 x 9.55 mm and weighs 181 g.

Meanwhile, the company has also launched its Verve Loop Bluetooth in-ear headphones through Shyam Telecom, which is the Indian licensee of Motorola Companion Products range in India. The headphones are priced at Rs. 2,499 and will be available via both, offline retail stores as well as online channels. 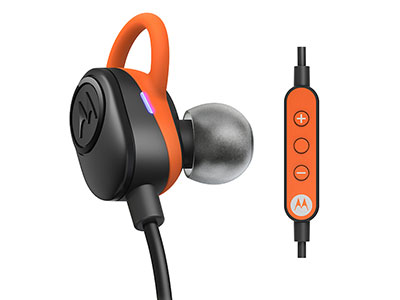 As the name suggests, the headphones come with Bluetooth support and also come with an IP54 rating for water and splash resistance. As per the company, Motorola Verve Loop Sports Bluetooth in-ear headphones offer consistent and high-quality audio experience as well as easy Bluetooth pairing. It is powered by a lithium-ion battery which delivers up to 6 hours on a single charge.