After being up with several leaks and rumours from a while, the fairly anticipated Moto Z2 Force from the Lenovo-owned Motorola has finally been announced. Motorola had scheduled an event on the 25th of July in New York where it was expected to launch a new smartphone and it is the Moto Z2 Force that has made its way. The smartphone has been announced in the United States and will be available in Super Black, Fine Gold and Lunar Grey options.

Coming towards the pricing details, the smartphone is priced at $799.99 (Rs. 51,500 approx.) in the U.S. It will also be available at a $30 per month contract with free Moto Insta-Share Projector Moto Mod for purchases till September 9, 2017. It is already available for pre-orders through AT&T, Sprint, T-Mobile, U.S. Cellular, Verizon, Best Buy and Motorola.com and will be available for purchase from August 10. As for now, there is no clue of its arrival in India or other markets in Asia.

As mentioned earlier, the Moto Z2 Force was prone to many leaks and rumours which indicated that the smartphone will come with a shatter proof display. The rumour indeed comes to be true as the smartphone holds a 5.5-inch Quad HD  (1440 x 2560 pixels) POLED display with ShatterShield. Similar to most of the latest flagships, the Moto Z2 Force is also powered by a 2.45 GHz Octa-Core Qualcomm Snapdragon 835 processor with Adreno 540 GPU. The smartphone comes with 4 GB RAM and 64 GB internal storage which can be further expanded up to 2 TB using a microSD card. The device runs on Android 7.1.1 Nougat.

Talking about the imaging department, which is again one of the premium highlights, it includes a dual camera setup at the rear with both 12 MP Sony IMX386 sensors. One out of the two sensors is for capturing colour pictures while the other one is for capturing pictures in Monochrome. The dual-rear camera is accompanied with a dual-tone LED flash along with PDAF, Laser Auto-Focus and support for 4k video recording. There is also a 5 MP camera with f/2.2 aperture, wide-angle lens and a dual-tone LED flash as well, for better selfies in low light.

The Moto Z2 Force packs a 2,730 mAh battery with Turbo Charging, where the smartphone also comes bundled with a 15W Turbo Charger. The build quality of the smartphone looks quite strong and sturdy as its frame comes with reinforced 7000 series aluminium, which makes the device even stronger. The phone further holds water repellent nano coating which makes it splash proof. It contains a front mounted fingerprint scanner embedded in the home button. The connectivity options include, 4G VoLTE, Wi-Fi 802.11ac (dual band) with MIMO, Bluetooth 4.2 with 5.0 support coming with Android O update, NFC and USB-C. Interestingly, the company has eliminated the 3.5 mm jack this time and will go for the USB type-C adaptation. 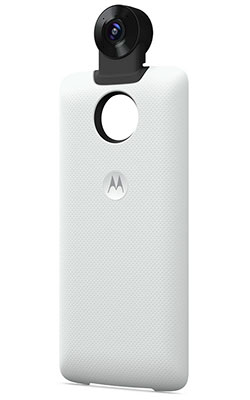 Along with the smartphone, Motorola also launched a new Moto Mod as it was expected. The company announced the new 360 degree camera Moto Mod which has an ability to shoot 360 degree 4K videos with 3D sound. The camera will enable users to shoot, edit, and share 360° video, audio, and images with the help an ultra wide-angle 150° field of view, right from your phone itself. Apart from this, it will also allow the users to instantly share or livestream the content to their social networks. The Moto 360 degree camera Moto Mod will be available globally for $299.99 (Rs. 19,400 approx.) from August 10.