OnePlus 5 is by far the most anticipated flagship smartphones in recent times. While OnePlus fans are eagerly waiting for the smartphone to arrive, there are new traits about OnePlus 5 popping every now and then, further increasing the excitement. The company has already confirmed the inclusion of Snapdragon 835 SoC and its partnership with DxO to develop high-end smartphone camera. Now there is finally some news regarding the exact launch date of the smartphone. Moreover there is another fact in context with the design of the smartphone that has been confirmed.

First about the design of the smartphone, the news comes from China’s microblogging site Weibo, where OnePlus CEO Pete Lau stated that as per his belief, OnePlus 5 is the slimmest flagship smartphone yet. It is still unclear whether it is with respect to all the flagship smartphones present around or just amongst OnePlus flagships. CEO Pete Lau further mentions, that OnePlus didn’t have to make any compromises to make the OnePlus 5 thin, and that he has already been using the device.

Apart from this there is also a poster leaked online which suggest that the OnePlus 5 is set to launch on June 15. The leaked poster clearly shows the date 15.6.2017 but doesn’t specifically mention the name of the OnePlus 5. However considering all the hype around the smartphone it is most likely to unveil the OnePlus 5 as bringing anything else would be killing the thunder for the smartphone. 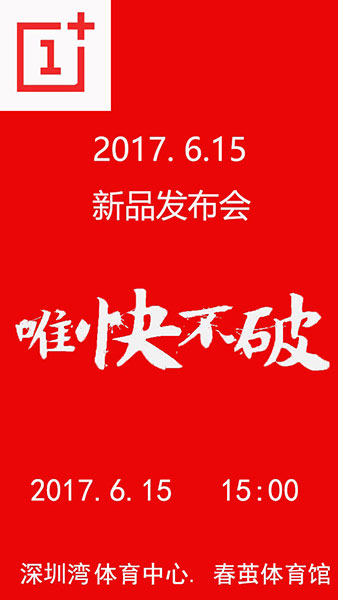 Coming down to the rumoured specifications, OnePlus 5 is speculated to feature a 5.5-inch QHD (1440 x 2560 pixels) display and will be powered by a 2.35 GHz Octa-core Snapdragon 835 processor which has recently been confirmed. The smartphone will come with 6 GB RAM and is also rumoured to come with an 8 GB RAM variant. The smartphone is expected to be available with 64 GB and 128 GB internal storage options which can be further expanded via microSD card. OnePlus 5 is expected to hold a 23 MP rear camera and a 16 MP front camera. As the smartphone is speculated to come with dual-rear camera setup, therefore how exactly the 23 MP will be divided is still unknown.