Various Samsung smartphones including its flagship Galaxy Note 8 have been hitting the rumour mill from quite a while, indicating company’s plans for its upcoming arrivals this year. There is yet another leak about a Samsung smartphone and this time it is regarding the 2017 iteration of its Galaxy C7 which has apparently received Bluetooth certification. 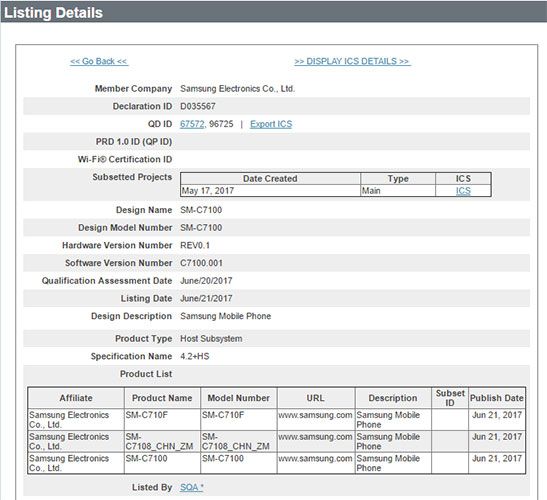 Looking at the specifications of last year’s Galaxy C7 for reference, it sports a 5.7-inch Full-HD (1080 x 1920 pixel) Super AMOLED display and is powered by a Qualcomm Snapdragon 625 processor clocked at 2.0 GHz along with Adreno 506 GPU. The smartphone comes with 4 GB RAM and 32 GB /64 GB internal storage which is further expandable (upto 256 GB) via microSD card. In the imaging department, the Galaxy C7 (2016) offers a 16-megapixel main camera coupled with a dual-LED flash, as well as an 8-megapixel front-facing sensor with f/1.9 aperture. The device also comes with fingerprint scanner embedded in its front-facing home button, and is powered by a 3,300 mAh battery supporting Quick Charge 3.0, and runs Android 6.0.1 Marshmallow.