As per the listings on GFXBench, Samsung J3 (2017) with a model number SM-J330 will reportedly be powered by an Exynos 7570 processor contradicting previous rumours where the smartphone was said to be bearing a Snapdragon 430. There could also be a different variant as well since, a smartphone with model number SM-J327 was spotted earlier as well. 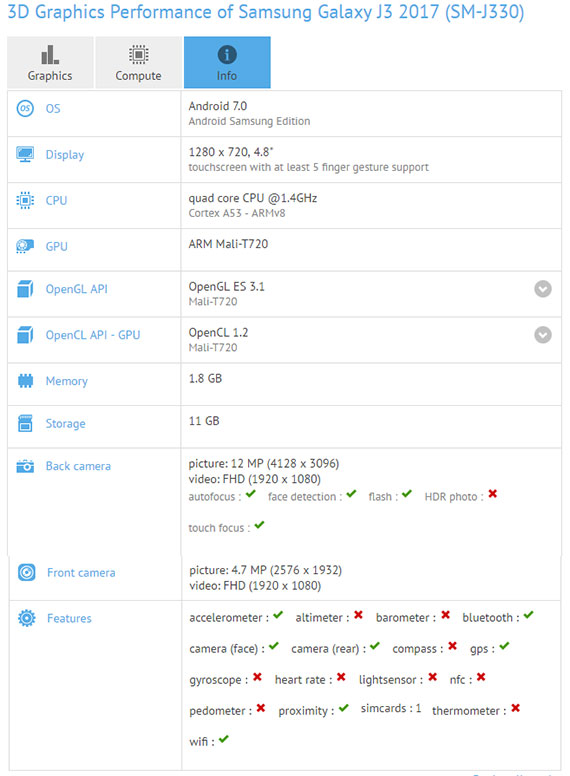 As per the listing, the smartphone boasts a 5 inch screen with HD (1280 x 720) display. Along with the Exynos 7570 processor, there’s also a Mali T720 GPU in the smartphone. The Galaxy J3 (2017) will be coming with 2 GB RAM and 16 GB internal memory. The device is said to be running Android 7.0 Nougat which is justified considering its launch period.

If we were to compare the Galaxy J3 (2017) with its 2016 version then it surely looks upgraded. The Galaxy J3 (2016) bares a 5-inch HD Super AMOLED display and a 1.5 GHz quad-core processor along with 1GB of RAM and 8GB internal storage coupled with an expandable memory. For imaging, there is an 8-megapixel rear camera and 5-megapixel selfie camera. It comes with a  2,600 mAh battery. The smartphone runs on Android 5.1 Lollipop and is a dual-sim device.