Since last many months, the smartphone consumer market has been full of rumors, images and leaks about Samsung’s much-awaited flagship phones the Samsung Galaxy S9 and S9+. Further development about the same has been coming in today from Samsung, in the form of official invites in a very minimalistic manner for the launch event of their flagship phones, which is scheduled to take place on the 25th February 2018 at a packed event in Barcelona. Feb 25th will also mark the beginning of the MWC 2018.

Adjacent to the official announcement, a new leaked video showcasing, possibly what looks like a working model of the Samsung Galaxy S9 and S9+ has surfaced online. The video which was released on Weibo has increased the hype surrounding the Samsung Galaxy S9 and S9+ ahead of the official launch next month. Since the video was very brief, it was hard to make out the model of the phone, but the navigation icons at the bottom confirm that it is a Samsung device,  so it can be fairly assumed that it’s the upcoming Samsung flagship phone. 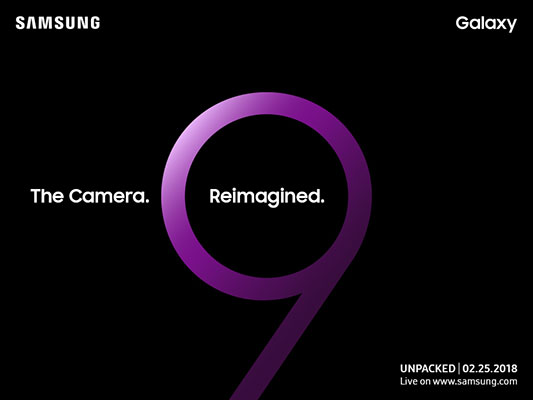 The official announcement of the event was accompanied by a statement, on the official website Samsung Newsroom US. Along with the invite, some extra chatter has been doing the rounds in the consumer market, which claims that Samsung has made significant improvements to their camera technology. If the rumors on the internet are to be believed the Samsung Galaxy S9 and S9+ will feature a new and improved ISOCELL image sensor which carries Tetra cell and Smart WDR to enhance image results since they are capable of shooting 1080p at 480fps.

The Galaxy S9 is expected to come with a 5.8 inches (1440 x 2960 pixels) Super AMOLED, Infinity display with 18.5:9 aspect ratio, with 568 PPI pixel density and Corning Gorilla Glass 5 protection. The smartphone will be possibly powered by an Octa-Core Qualcomm Snapdragon 845 SoC or the company’s very own Exynos 9 Series 9810 SoC and will be available to consumers with a memory configuration of 4 GB RAM and 64 GB internal storage, which will most probably be expandable up to 256 GB. Whereas, on the other hand, the Samsung Galaxy S9 + will feature similar specs, but with a larger screen and display size.