Xiaomi, the Chinese Smartphone company has done very well in the past with its various range of smartphones. The Xiaomi Mi 5 flagship smartphone launched in first half of this year was a beast. And now, according to various sources and listing on AnTuTu, Xiaomi is looking forward to bring Mi 5s which is said to be an advanced version of the Xiaomi Mi 5.

The Xiaomi Mi 5 packed Snapdragon 820 SoC and now the rumoured Xiaomi Mi 5s is expected to come with Snapdragon 821 SoC clocked at 2.4 GHz and Adreno 530 GPU. With the likes of LeEco and One Plus sporting 6 GB of RAM, Xiaomi seems all set to level up with its competitors with Xiaomi Mi 5s. 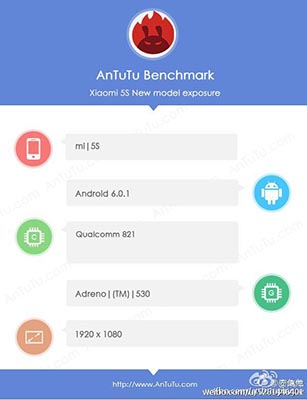 Further, it is expected to sport a huge 256 GB of internal storage with 3490 mAh battery. The 5.15-inch Full HD display with Corning Gorilla glass 4 protection might come with a 3D touch feature. Rest of the features might be the same, which includes 16 MP rear camera with 4k Video recording and 4 UltraPixel front camera, with 2-micron pixel.

Xiaomi has not made any official announcement yet, so we can expect some more speculations and rumours about this smartphone. But, a specked-up version of the Mi 5 flagship is certainly on the cards.