Leaks of the Xiaomi Mi 6 still continue to flow even with only a few days left for its launch. Xiaomi recently confirmed that its new flagship Mi 6 is going to be launched on 19th April and ahead of the launch, the smartphone is spotted on the most popular bench marking site with details of its processor and RAM. 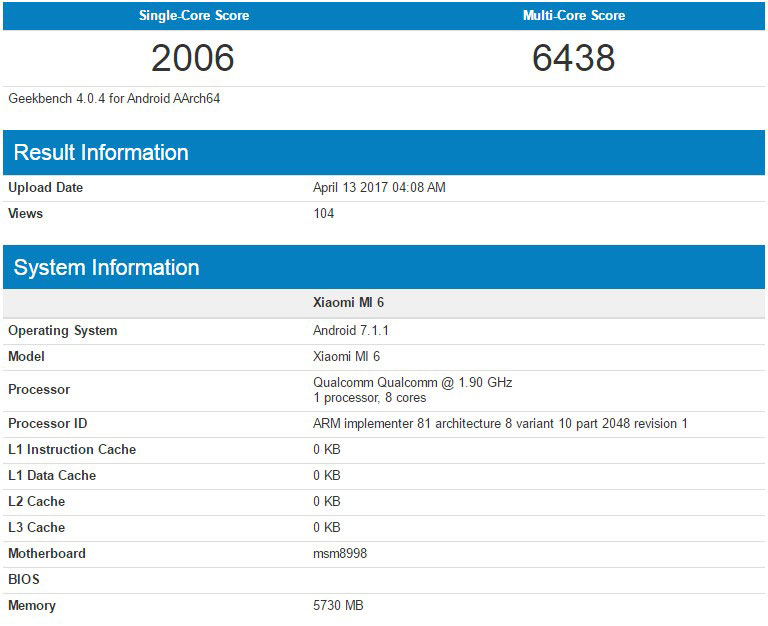 As per the listing on Geekbench, the Mi 6 will run on Snapdragon 835 processor and will come with 6 GB RAM. The listing shows the processor clocked at 1.9 GHz, unlike all the previous rumours which claimed it to be clocked between 2.5 GHz to 2.7 GHz. The smartphone seems to be running on Android 7.1.1 Nougat and it is obvious to have MIUI on top. The Mi 6 scores 2006 points on the single core test, while it scores 6438 points on the multi-core test which is amazing.

Re-browsing the previous rumoured specifications of the smartphone, it is expected to sport a 5.15-inch Full HD display. It is also rumoured that the phone will hold a Bezel-less design similar to that of the Samsung Galaxy S8 & S8+. Coming towards the camera, it is assumed to have a 19 MP rear camera and an 8 MP front camera. There are also rumours about the smartphone having a dual camera setup. It will come with 32 GB, 64 GB and 128 GB storage options and a 3200 mAh battery to power itself. The most recent leak suggests that the smartphone will also sport an Iris scanner.