The Lenovo backed ZUK seems to be planning the launch of its next flagship phone, ZUK Pro 2 on April 21st. The company’s CEO Chang Cheng recently released a new teaser image of the phone.

From teaser image we can see the render having a cured glass display, camera on the back with dual-tone LED flash and laser auto focus. And as for the specifications, nothing is revealed by the company, but we have got some details on AnTuTu benchmarking. 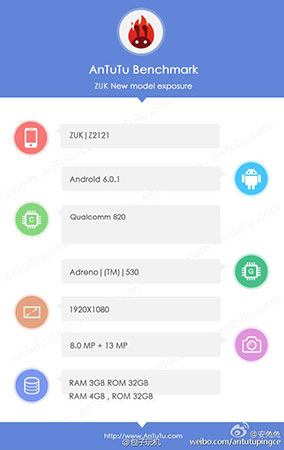 The listing also reveals that it may sport 13 megapixel rear camera and 8 megapixel front-facing camera. It will feature a fingerprint sensor and USB Type-C port.

Well, all the details will get confirmed on the launch date, so stay tuned!